The 1st and youngest ruler in india who Fight against East INDIA COMPANY in 1824 on His (Military station) called Chavni at SEHORE.  Kuwar Chain Singh ji married with Kuwrani RAJAWAT ji from Thikana-Muvaliya a Royal Thikana (Jageer) of Narsinghgarh State. Kuwar Chain singh ji’s Due to illness of his Father Rawat Sobhag Singhji,Prince Chain Singhji was in charge of the administration of the State.Prince Chain Singh ji was courageous, brave and intelligent.He was a highly self-respecting person.He ruled the State with a firm hand giving justice to one and all evenly.The People of Narsinghgarh State admired him and held him in high respect.Historical evidence says Prince Chain Singhji was
reluctant to acknowledge the supremacy of the East India Company. This irritated the Company and they were waiting to get to his jugular vein. In a planned murder one palace official named Vora who was returning from the palace was assassinated.

The Company held Prince Chain Singhji responsible behind the murder and asked him to leave the State and proceed to Banaras. The Prince refused to accept the murder charge and defied the Company. This was considered as rebellion by the East India Company. As a result a battle took place between Prince Chain singhji's forces and military of East India Company in 1824 at Sehore a town about 37 kilometer West of Bhopal. He fought valiantly and died in the battle at the age of 24 years.

His Samadhi is situated near the battlefield.He is considered as “Amar Shaheed of Malwa” and as such recognized officially by the government of Madhya Pradesh. All communities go to his Samadhi and offer prayers and seek his blessings. Himmat Khan and Bahadur Khan, Jagirdars of Dhanora of Narsinghgarh State were killed along with him. Their tombs are built near the Samadhi of Prince Chain Singh ji at Sehor. 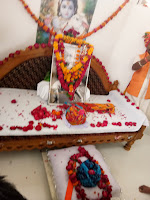 A Beautiful DAM also named to Kunwar Chain Singh SAGAR DAM by Government of M.P.The DAM is 30km from City and Reached By a Road. 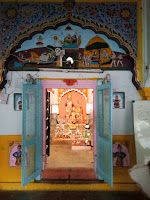 Rani Lakshmi Bai of Jhansi had heard about Prince Chain Singhji's rebellious attitude towards the East India Company and the battle he fought with the Company at Sehore in 1824.She decided to approach the Narsinghgarh State for help in the first war of Independence of 1857 against the Company to which the then Ruler of Narsinghgarh agreed.But unfortunately before Narsinghgarh could render any sort of help,the Rani was surrounded by the Company forces at Gwalior and she became a martyr. After the martyrdom of Rani Lakshmi Bai,Tatya Tope her close confidant and main supporter in the first struggle for Indian Independence of 1857 came to Narsinghgarh and was clandestinely kept by the Ruler in the thick forest of Kantora just behind the Fort Palace for quite a long time till he moved to another location to carry out his struggle.   www.karnisena.com  Source :- www.narsinghgarh.com